This behavior leads to incorrect analysis. It should be fixed.

Rising priority to "Normal" after the discussion that took place today.

To be done this sprint

Here's a very simple example of this bug.

The first will be unsafe, the second—safe. However, the driver is unsafe. If you look at the output of the latter command, you'll notice near the end:

This is the bug: the node isn't covered actually.

The issue with the coverage is not what we described it to be.

Assume three paths converge in one point. The first comes with [a = 10; b=1] lattice, the second—with [a=10; b=2] lattice, the third—with [a=10; b=3] lattice. When the algorithm iterates into the node, it updates the lattice region by joining the one being posted and the one already in the node, and it continues the traversal with the lattice region set to the result of the join.

As a result, when iteration reach the convergence point with the 2nd lattice, the joined result is [a=10]. Thought imprecisely, this reguon is a superset of the set of possible values. But after the 3rd path posts its lattice to the same region, it becomes [a=10; b=3], because in [a=10] region there is no information that we knew something about b.

A solution would be to make the region look as [a=10; b=⊤] after joining 1st and 2nd paths, which is really the result one could expect. Then, when the third path joins, the region would still look like [a=10; b=⊤], and this would be correct. The thing is in BLAST's lattice implementation, such "tops" are explicitly withdrawn; perhaps, for performance reasons.

I also suppressed reasoning about coverage based on lattice regions. Assume that you came to the convergence point along these three paths. Then, at the node after the convergence point, the 2nd and the 3rd paths would have the same lattice regions, and one node would cover the other. This will result in a cutting of the whole program path, along which there may be an error. Lattice coverage is inherently imprecise, and that's an unimprovable property of lattice checkers.

So, I suppressed lattice-based coverage checking and the explicit withdrawal of tops, and ran generic tests.

I observed a drastic performance degradation. Instead of completing tests in one night, they had been working for 3.5 days when I stopped them. Indeed, a significant amount of drivers timed out (and the funny thing is that the most timeouts were BLAST's native, not imposed by the timeout script). However, in those drivers, whose checking finished, there was a precision improvement.

More work on this issue is required.

It didn't work either.

It happened that I turned off the whole coverage procedure, not just its lattice part. Hence the results: an enormous runtime and never-ending checking for programs with loops :-)

But even before I fixed it, I understood that turning off lattice's coverage checks doesn't help either. Assume the following program:

The error would be missed, since the checker would first find L1-L3 path, and at the location L3 the lattice would be [a=1]. This wouldn't allow checker to find an error, since the error path would be cut.

When the checker then traverse along L2-L3 path, at L3 location, the non-lattice regions is covered by the first node at L3 (both regions are sets of all possible variables). This would lead to missing the error.

The attempt to fix this bug is located in the lattice-top-cover-fix in the BLAST local repository.

Middle regression tests run faster, but the errors found are completely random (most drivers are verified less correct than the original BLAST does, but some drivers are more correct).

Notes on
11. But to the ART tree BLAST adds the node with the region {{bdd=[b>=10] lattice=[]}. Only lattice parts are merged!
It does not contradicts to theory in general. Because theoretically merge may return any result greater or equal to the merging element $$e_2 \subseteq merge(e_1,e_2), where e_2 is a new merging element$$. In particular it may not merge at all. So the contratiction is that regions stored in the reached Union and in the ART node are different.

So the contratiction is that regions stored in the reached Union and in the ART node are different.

I still don't get it...
ART and Union are the same thing in BLAST. Aren't they? Could you describe the contradiction more carefully?

Reached Union (as I call it) is a parameter of Region.leq (abs-region.ml). I don't know where it is stored.
Region.cup changes it. ART node stores different value produced by playing with Region.cap.

Looking at the code I think reached Unoin is stored in

Thanks to Pavel, after discussion I understood the root cause of the bug.
Reached Union (R) In BLAST is used for coverage check. For optimization they store in the R for each location a joined region and consider that some region is covered if it is covered by joined region in R. But this can be done only if regions are powerset domain i.e.
$[[e_1 \sqcup e_2]] = [[e_1]] \cup [[e_2]]$, where [[.]] returns a set of concrete states. For the regions with lattices it is not true, because join may introduce addtional concrete states.

After discussion we work out two solutions:

Alright, so we're going to fix it as in Example A.

We need to fix the region type (and fix a lot of code that creates new regions) and implement region cup and leq functions.

NoNewPredicates was caused by mistake in my merge function. I used leq for checking equivalence of bdd :) which is obviously wrong. I debugged it on the example stateful.c attached.
pblast.opt -stop-sep -merge bdd -predH 7 -craig 2 -cldepth 0 -smt -lattice -include-lattice symb stateful.c

Results of prev runs are in ftp://shved/upload/lattice_fix_1
description of runs
#19

Comparision of "shved, default" with "joker, merge at bdd fixed" 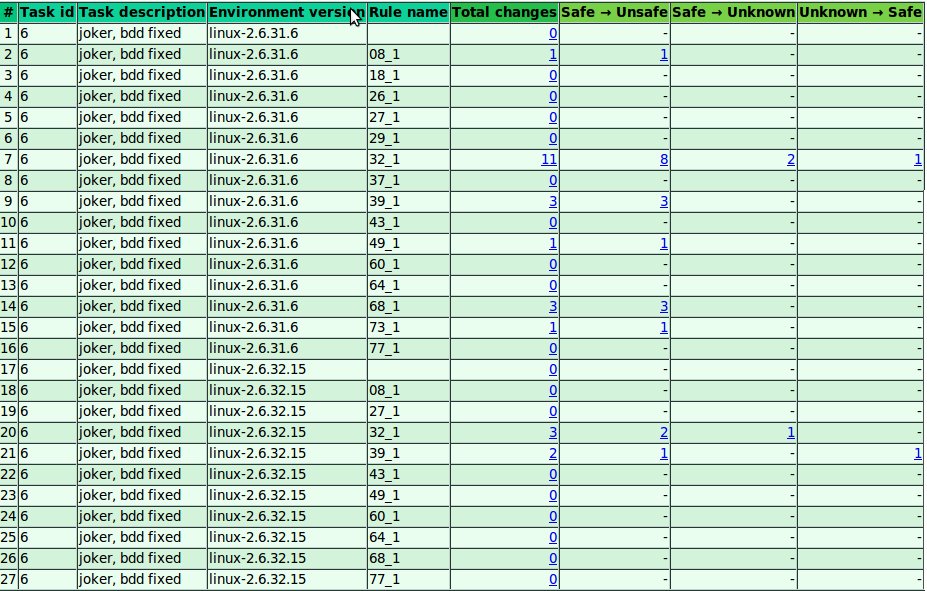 Comparing default and bdd on 2.6.31.6 with 1gb memory limit:
we have one new unsafe, six new safes, and six previously safe (possibly incorrect due to bug in lattice) which became unknown. The good news is that we didn't lose any unsafe.

But if we compare default on 1gb with bdd on 2 gb we will see much difference :)

On linux 2.6.34 with 2gb bdd finds about two times more unsafes (12/7) and does not lose any unsafe found by default.

For generic test set increasing memory limit didn't give any substansial improvement.
For default we have +2 safes. For bdd we have +1 unsafe, +1 safe, and lose 2 old unsafe (degradation!). The cause of degradation may be different machines running the tests (shved and joker).

Updated by Pavel Shved over 10 years ago

Since we didn't have any issues with this (aside from the anticipated 1.5x runtime increase), I'm closing this.

Updated by Pavel Shved over 10 years ago

Updated by Pavel Shved about 10 years ago

Updated by Pavel Shved about 10 years ago